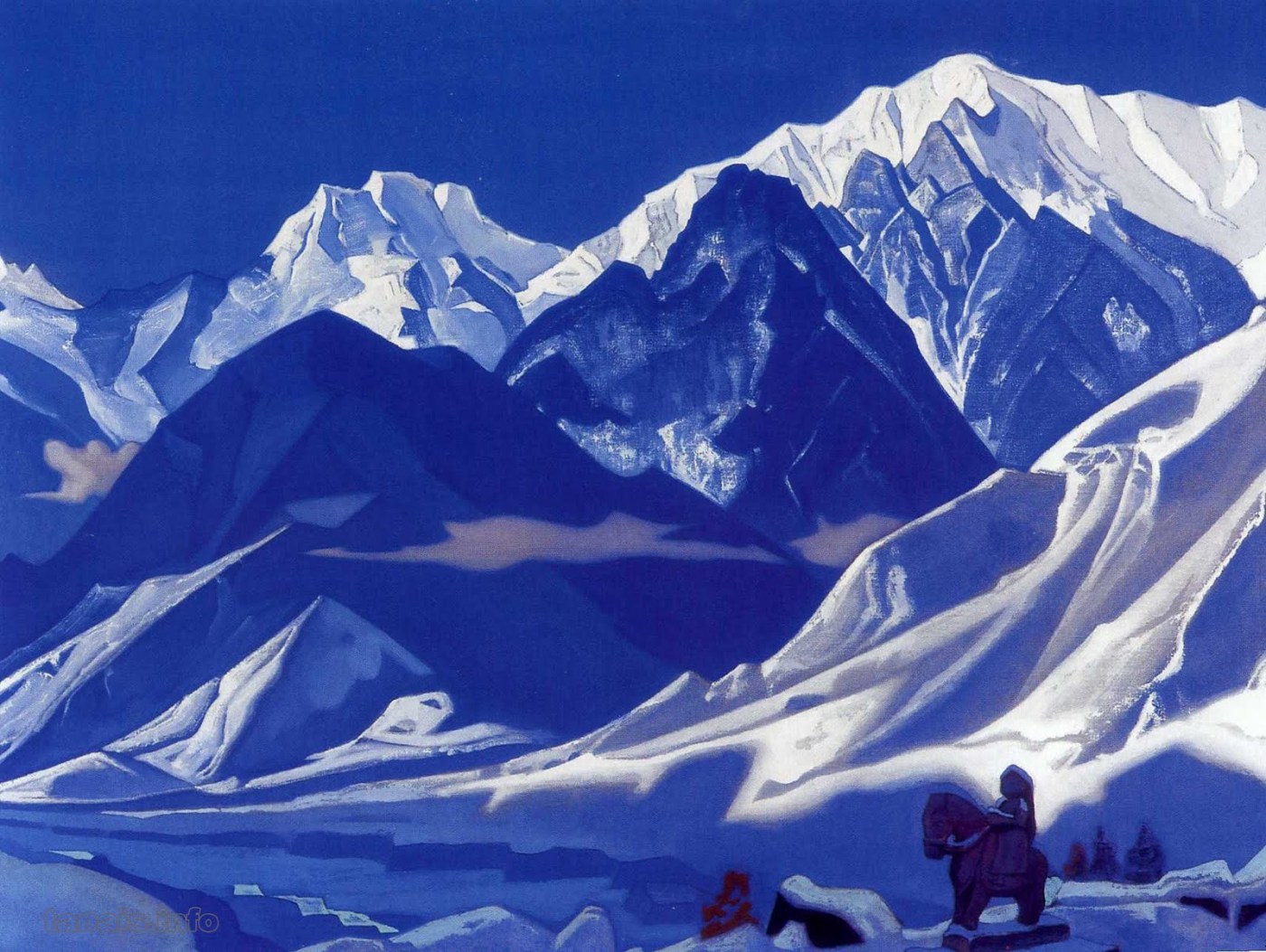 The National Gallery of Modern Art in New Delhi is a place I love going to, although I must also say that I don’t visit it as often as I should. One of India’s few- and the best by a long shot- state-owned art galleries, NGMA’s collection is a medium sized but fascinating one. Leaving aside the Gallery’s collection of contemporary Indian art- which is sizable- its the permanent exhibits of the Bengal School of Art and those of other artists related to it like Amrita Sher-Gil, that keep drawing me back. There’s a degree of inventiveness and boldness to the work of this large body of artists that I find lacking in most of our contemporaries.
The collection that I never miss, however, is that of the Russian artist-philosopher-mystic-anthropologist-archaeologist-traveller Nicholas Roerich. His mountain paintings are unmatched in their breadth, depth and scope. Its almost like stepping into an alternate universe where mountains perform the roles of deity, habitat, scenery and a spiritual challenge all at once.

And that’s just on one level. At another, they are masterful studies in light and tone.

Although Roerich has as distinct a style as any painter, no two mountain studies are similar, even when he’s painting the same mountain from essentially the same vantage point, as these superlative studies of Kanchendzonga show. 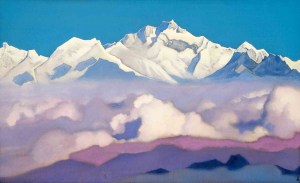 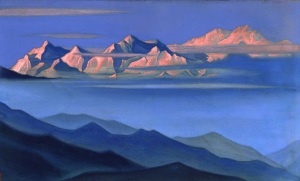 In no other artist’s depiction of mountains have I seen geography consistently appearing as fully fledged characters. To look at a painting like Nanda Devi is to drown in that mountain’s divinity, sheer physical beauty, as well as the immense psychic power that she wields on the people who live in her shadow.

The 6 prints I have from NGMA are part of Roerich’s Himalayas series, which he contributed to sporadically over a period of roughly twenty years. This mammoth series alone has over 2,000 paintings- a testimony to Roerich’s prolific output. All, this master painter created over 7,000 paintings over many other series, which is staggering by any standards. However, the quality of his work never suffered. 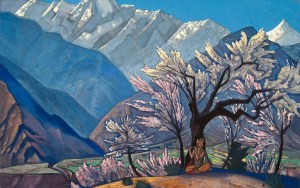 Roerich’s interest in the range took many forms, each one mirroring one of his many pursuits. As a dedicated chronicler of culture both indigenous and shared, the plethora of disparate cultures and yet close cultural borrowings on both sides of the Himalayan crest fascinated him. He wrote,
“The Himalayas, in their full might, cross these uplands; behind them, rises the Kailasa, and still farther, Karakorum and the mountain kingdom crowned in the north by the Kuen Lun. Here also are the roads to the sacred Manasarowar: here are the most ancient paths of the sacred pilgrimage. In this region is also the Lake of the Nagas, and the lake Revalsar, the abode of Padma Sambhava. Here also are the caves of the Arhats, and the great abode of Siva, the Amarnath Caves; here are hot springs; here are the 360 local deities, the number of which testifies how essential are these very sites of the accumulation of human thought through many ages.”
The Himalaya’s greatest hold on Roerich, though, was in matters of the spirit. On completing his epic 1923-1928 expedition through Sikkim, Tibet, Kashmir, Ladakh, Siberia, Altai and Mongolia to collect and preserve cultural texts, he was so drawn to the great range that he set up both his home and his Himalayan Research Institute in Naggar in the Kulu valley. He considered the Himalaya a  symbol of humanity’s inherent hunger for transcendence through beauty and knowledge, a common cultural thread that he’d observed in his wide ranging travels. He called the range the “Treasure House of the Spirit.”
His paintings do justice to that claim, like his study of the Chandrabhaga river or the unforgettable Ice Sphinx. 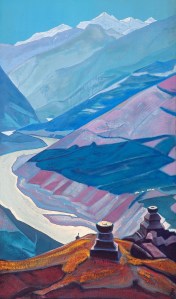 
People appear only at the margins of his mountain canvases, but they’re an important part of the whole, both grounding the soaring majesty of the backdrop as well as well as providing context for the allusive stories that he tells through his canvases.


Some of them bear strong influences of his earlier Iconographic art- tropes and symbolism that he adapts marvelously for his latter paintings. 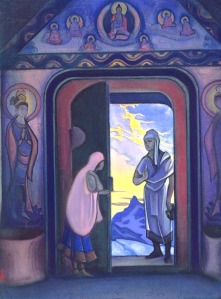 
Over the years, you can see his style change. From real, tangible geography, his paintings seem to turn inwards, as he washes the paintings more, giving more of a hint of indistinctness and interpretive haze. They become even more metaphorical, but even then they’re never anything other than mountains, because that’s all they need to be in Roerich’s paintings. It reminds me of the Zen Buddhist saying, “You look at the Void, and the Void looks back at you.”


Even without delving too deep in his symbolism, its impossible not to come away from this huge and varied body of art without a profound sense of peace.


And to think he did all this, as well as create the Roerich’s Pact, and the theatrical designs for Stravinsky’s Rite of Spring!

An edited version of this appeared in the Trek World magazine.